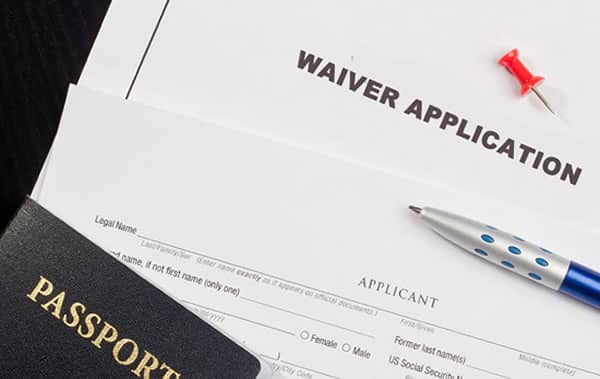 If you have previously been deported and you are seeking to re-enter the United States, you will need a waiver which you apply for on Form I-212 (and so is typically called an “I-212” waiver).

For example, if you are married to a United States citizen and have an available visa, you would also need an I-212 waiver when you apply for a green card at the US consulate in your country. You may also need another waiver and need to file an I-601 waiver as well.

Some applicants may qualify to apply for such waiver with the USCIS, such as immigrant visa applicants who do not require an I-601 waiver, or applicants for adjustment of status. Canadians will apply for the same at a Port of Entry.

Applying to enter the United States with an I-212 waiver (and potentially other waivers) can be very complicated and time-consuming if you are not aware of everything you need when you go to the consulate, or which agency you are eligible to submit your application to. Our firm can be an asset as we guide you through this process. However, our expert attorneys also can you guide you as to what types of evidence can demonstrate your eligibility for the I-212 waiver.

Typically, I-212 waiver applications should include proof of the following:

Call our office today to schedule a consultation with one of our expert attorneys, Suzanne Vazquez and Maud Poudat to determine if you or a loved one is eligible to return to the United States after a previous deportation.

Waivers for unlawful presence, misrepresentation, and commission of a crime involving moral turpitude

These waivers are filed on Form I-601 and require extensive documentary evidence to show that you meet three factors.

Some of the discretionary factors that USCIS considers include:

Waiver for Fraud or Misrepresentation (212(i) waiver)

If you engaged in fraud or willfully misrepresented a material fact while you were trying to obtain a visa or other documentation, trying to enter the US or attempting get any other benefit in the United States, you will be inadmissible for life, unless you obtain a waiver called the 212(i) waiver.

It is important to note that if you have falsely claimed that you are a US citizen in order to obtain an immigration benefit or other federal benefit, or for any other purpose, there is no waiver available for you.

Waiver for Misrepresentation for LPRs only

For certain deportable lawful permanent residents who have made misrepresentations or engaged in fraud at the time they were admitted to the United States, there is a special waiver under INA 237(a)(1)(H). If you are granted this waiver by an Immigration Judge, your proceedings in front of the Immigration Court are terminated.

For this waiver, you must:

The INA 237(a)(1)(H) waiver can be an important form of relief for you if you are a LPR and have made a misrepresentation because it waives your removal, your underlying inadmissibility issue, and the misrepresentation/fraud you engaged in. This waiver is also very generous because (1) you do not have to show that your qualifying relative will suffer hardship in order to obtain the waiver and (2) you do not have to pay a fee for this waiver.

This waiver does not require a form to be filled out which makes it advantageous to have an attorney who can present your evidence and eligibility for this waiver in a manner preferred by the Immigration Court. Call our office today to schedule a consultation with one of our expert attorneys, Suzanne Vazquez and Maud Poudat!

If you have been convicted of, or admit to have committed an act, which is considered to be:

you will be inadmissible to obtain status in the United States without a waiver.

Crimes involving moral turpitude (“CIMT”): A CIMT refers generally to conduct that is inherently base, vile, or depraved, and contrary to the accepted rules of morality and the duties owed between persons or to society in general. There is no existing definition of what is a CIMT. However, several court precedents have offered some interpretation of the term. Our expert attorneys can assess your past criminal history to determine whether your criminal conviction constitutes a CIMT.

There are two exceptions to the admissibility rule for a CIMT:

Other Criminal Grounds of Inadmissibility:

There are certain specific types of criminal behavior that result in their own ground of inadmissibility:

You may have read in the news that the government is trying to expand the number of people who are inadmissible for green cards based on whether they or their family members have received certain government benefits in the United States. There are a lot of rumors about these changes and the rule has not yet been finalized and it will only affect individuals once the rule is finalized (meaning it is a forward-looking rule not a backward-looking rule). If you have concerns or questions about how this rule may affect you, we suggest you call our office today to schedule a consultation with one of our expert attorneys, Suzanne Vazquez and Maud Poudat.

Generally, this ground of inadmissibility applies to you if at the time you apply for a green card if the government believes that you would be considered what the law calls a “public charge.” This term does not have a specific definition which is part of what makes this difficult for individuals to determine if it applies to them, but very broadly, it refers to a situation in which an individual is going to become reliant on the government because they are unable to take care of themselves financially. The government looks at the circumstances in totality to determine if a person is likely to become a public charge, including: your age, your health, your family status, your education, skills, and past employment, your financial resources and current financial status. The government also looks at whether you have received public assistance in the past or had income below the federal poverty line.

If you are planning to submit a green card application and you have concerns about whether the government would find your relative to be a public charge, you should consult with one of our expert attorneys before submitting any application. Call our office today to schedule a consultation with one of our expert attorneys, Suzanne Vazquez and Maud Poudat!

If you have knowingly encouraged, induced, assisted, abetted, or aided another person to enter the United States illegally, you can also be found inadmissible (Note: this is different than human trafficking as described above). There is a specific waiver for persons who have smuggled immediate family members into the United States, however they are only available in certain situations:

Contact our Board Certified Immigration Attorneys in Orlando, Florida

If you may need a waiver of inadmissibility, then you should seek help from an experienced board certified attorney who has proven their qualifications to the State Bar in order to have that designation. Call us at (407) 674-6968 during office hours or email us at info@vpimmigration.com and we will call you right back. If you have an emergency after office hours please call us at (407) 925-2554 and we will contact you shortly. US Immigration Attorneys Suzanne E. Vazquez and Maud Poudat are Board Certified as experts in Immigration Law by the Florida bar. Based in Orlando, Fl.